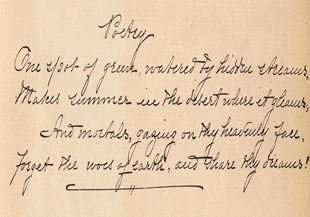 With December 20th being Poet Laureate Day, let us briefly visit the article “The Most Famous Legal Poem.” The author mentions the Pennsylvania Supreme Court case Porreco v. Porreco (2002), in which Judge J. Michael Eakin unorthodoxly included couplets in his dissent—such as “A groom must expect matrimonial pandemonium/When his spouse finds he’s given her cubic zirconium.” His poetic dexterity did not impress some of his colleagues, as Chief Justice Stephen Zappala believed that expressing an opinion in rhyme reflected poorly on the Supreme Court.

Given that the poet laureates mentioned in this posting are typically appointed by a government or an institution to compose poems for special occasions, perhaps they had better success in conveying their poetical vision than Judge Eakin. Some of the poets have even worked in the fields of librarianship and law. Did you know that Ina Coolbrith (1841-1928), a relative of religious leader Joseph Smith, was a Bay Area librarian who became the first California Poet Laureate and the first poet laureate in any state? Or that John S. McGroarty (1862-1944), California’s third Poet Laureate, was a Pennsylvanian lawyer before he became a journalist and a California congressman? Solano County even has a place in the state’s poet laureate history. Dr. Henry Meade Bland (1863-1931), the second California Poet Laureate, was born in Fairfield, California and earned his doctorate at Stanford University.

As a fun project for the winter season, if you are viewing this posting from outside of Solano County, I encourage you to check and see if you have any poet laureates in your vicinity.  Although I am not a poet laureate, I would like to conclude this posting with a poem of mine published in 2006 (before I became a librarian): “Nomad.” I wish everyone a safe and wonderful holiday!

Any materials shared by Solano County Law Library is for informational purposes only and should not be interpreted as legal advice. Please contact a lawyer for advice on specific legal issues.

Spring/Summer 2021, Topic of the Quarter

Fall/Winter 2021, Topic of the Quarter

"Workplace Bullying and Hostile Work Environments" by Jonathan Watson With the new year looming, did…

Resource of the Month: Is the Truth Out There?

Is the Truth Out There? by Jonathan Watson A few years ago, while sitting outside…